What Do Developers Fear?

Certain things are guaranteed to send developers running for the hills

I’ve asked around a little, and it turns out that a comprehensive list could include hundreds of entries, particularly in the field of accidents, errors and malfunctions. There are indeed very many things that can go wrong in the world of programming!

The vast majority of these fears, however, are variations of a single theme, in the same way that being scared of being on a plane or on a helicopter both fall under the umbrella of “fear of flying”.

I have collected the four “umbrellas” under which the most common developer fears can be found. Steel your nerves before reading on!

Tech is among the most rapidly-evolving fields it is possible to work in today, which is part of what makes it so fascinating and rewarding. The downside of this is that as a developer, you are never allowed to rest on your laurels: either you constantly update your skills, or those skills risk becoming irrelevant as the industry and the technologies change.

Most developers know what it’s like to have a lingering (and sometimes not so lingering) fear that what they can do will no longer be useful to anyone in 10 years’ time. It is also, alas, something that tends to get worse the older you get. Do not despair though – learning often happens naturally on the job(s), and when it doesn’t, there are other ways of upskilling (including, of course, one of our bootcamps).

Being Revealed As A Fraud

Not at all exclusive to tech, yet undeniably prominent in this field, is imposter syndrome. This is the fear of being a fraud, the feeling that you are nowhere near as skilled as other people think you are, and the terror that this will soon be revealed in humiliating fashion.

It is probably a combination of reasons that makes imposter syndrome so widespread among developers. For example, there is the fact that one constantly has to Google for solutions, a normal practice which nonetheless makes people feel like they can’t take care of things by themselves. There is the inevitable feeling of confusion and frustration when you can’t find a bug. There is a cultural factor too, as developers are so often portrayed in films, books and games as impossibly smart.

How to deal with impostor syndrome is a question we have already handled more extensively. But for now, let me just remind you to keep track of your accomplishments and of the satisfaction of your clients and colleagues. That, and not your internal fears, should be the true measure of your worth.

Fear of Technology Itself

From the invention of steel to the splitting of the atom, all technological progress came with dangers. Working in tech means having an intimate knowledge of the potential threats posed by the technologies you are wielding, along with an awareness that the general population doesn’t really care about them. This does not exactly breed peace of mind!

Some developers may fret about the coming of the technological singularity, which is the hypothetical point when AI can improve itself faster than humans can respond to it. Others may feel anxious about the effects that social media manipulation can have on democracy and free speech. Others yet may lose sleep over the possibility that their product may have inadequate security, and may expose their customers to all sorts of data breaches. Not many outside of tech are likely to worry about such things in their everyday lives.

Ever heard one of those horror stories about an intern accidentally deleting all of their company’s code in the first week they are there? A miniature version of that makes for a remarkably common developer fear. Junior devs in particular will worry about making a trivial mistake, often due more to distraction than incompetence, which ends up bringing down an entire website, or else causes some kind of irreparable damage that will take hours to fix.

This light paranoia does not necessarily vanish as the developer gets better, because they will now be working on much larger systems used by thousands or tens of thousands of people at a time. In reality the odds of ‘breaking a system’ are normally pretty low – but keep backing up your code, friend. Just in case.

Technology is scary. Responsibility is scary. For many of us even just being a grown-up scary, and that’s because fear is normal.

Yet fear is also the necessary first step in learning anything new. So get out of your comfort zone and go create something beautiful with those developer skills you worked so hard to acquire. As one person famously said, you should have nothing to fear but fear itself.

How Will Developer Salaries Change In The Next 10 Years?

Why Senior Software Engineer Interviews Have Become So Damn Difficult 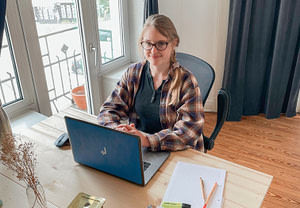 “Once I started, I discovered that having to know maths to code was a myth”

Imogen Drews went from teaching English in schools to a job as Frontend Developer for a cutting-edge tech firm. This is how she did it.

What Happens To Developers Who Never Go Into Management?

What if you never take that promotion?

The best way for a developer to impress an interviewer is to pass their coding challenge – but there are also other ways that objective may be attained.